Right now I'm still pretty out of the loop, but I received word via text message from the ER at approximately 9:30 this evening of the news. Apparently, earlier in the day Kinger had left his keys in his "other pants" when he left the house(Yes, I too am surprised that this has actually happened to someone I know now.) Seeing that nobody else was home upon his return, he had no choice but to pull an impromptu break-in.

Whilst gracing his majestic frame through his basement window, Kinger's lovesack seemed to have graced a little too hard against the windowsill.

Not being the type of man to make a big deal out of anything, he chose to ice the royal cajones for hours before finally deciding to sack up and get the injury looked at.

So, regardless of whether or not Kinger was trying to teach everyone an annoying lesson about relying on digital communication, at least we know that he's not unreasonable enough to keep playing the game when his little dangle-babies are in jeopardy.

And with that, dear readers, the plot officially thickens. Stay tuned for the next sizzling installment of The Kinger and I Summer Break: Thunder in Paradise 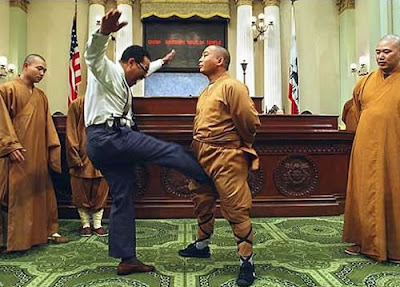 It was kinda like this, except the blue-panted leg was a windowsill
Posted by Bob Pearsall at 9:16 PM